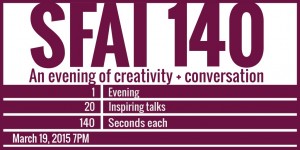 Georgina Lightning is a Canadian First Nations film director, screen-writer, and actress. She is also the first Native female director of a feature-length film.

See Georgina Lightning present a 140 lecture..on How Food Can be Used t Challenge Systems of Power @ SFAI ! She will join 19 other dynamic Creative Practitioners and Presenters at ‪#‎SFAI140‬ Wednesday at 7pm. Don’t miss out! Bring your community to this compelling event. If you miss being there in Person you can always watch for this exciting dynamic event in the SFAI websites programming.

In 2008 she directed, wrote, and starred in the supernatural thriller film Older Than America. As such, she became the first female North American aboriginal director of a feature-length film.The film won several awards from various film contests, including Best Feature Film, Best Director and Best Actor. The idea for the film came from her personal exploration of her father’s past.